When I say 'mountain biking' I may exaggerate slightly; for our first attempt we thought going for the blue Leisure Cycling Trail was probably wise rather than anything more adventurous. We went with friends so there were four adults and five children (ages 3-8) altogether. Our visiting friends and I hired bikes from the excellent Swinnerton Cycles (prices from £20 for 3 hours - book well in advance!) at Birches Valley, Rugeley. In addition to the bikes and helmets, we also hired a trailer for our three year-old which she called her "cool buggy" and in which she could have been mistaken for the Queen such was her sense of regal grandeur in her royal carriage!

Anyway, we headed along the blue trail, and the children were loving the sense of freedom, whilst for us it was relatively stress-free as there were no roads and therefore cars to worry about. Gears posed an issue for a couple of the children, and due to the uneven nature of the terrain, they were necessary in order to be able to ride effectively. A quick crash-course and a bit more practice would probably have sorted this out in advance, but as it was, they learnt 'on the job' and after a bit of cursing, got the hang of it.

When we had a break and the children explored the woodland, their inquisitive nature got the better of them near to a swamp-like area. The result was soaked through shoes and socks which were beyond any possibility of cleaning/drying in the short-term! The solution? Much to his humiliation, wearing his sister's Peppa Pig socks (tucked down as far as possible out of sight!), removal of the insoles which bore the brunt of the water, and two plastic bags tied around his feet to stop the remaining water soaking through to the aforementioned Peppa Pig socks! He looked a sight, but it did the trick and we happily continued on our way ;-) 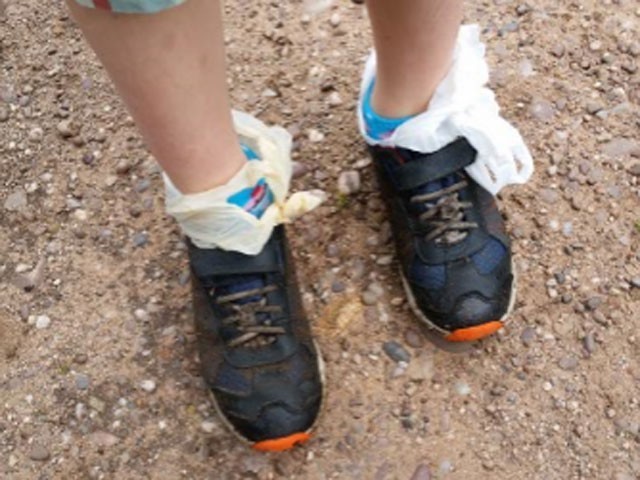 The steep climb up a stoney track proved too much for the children, so we did have to push up there much to everyone's frustration. However, we reached the top and from there it was just a short ride to the cafe and playground at the Cannock Chase Visitor Centre. In all honesty, it's pretty basic and could do with a makeover, but for us it served its purpose as the children wore themselves out a bit more on the playground and we got to have a drink.

We did a further few loops around the trail, but turned back after a couple of hours, as it was too much for the youngest of our riders, however not before the daredevils of the group found a huge hill to bomb it down at breakneck speed!

We arrived back at Birches Valley around 3 hours after we left, and continued to enjoy the facilities there for the rest of the afternoon with a craft tent for the little ones (there happened to be a Volvo event on with free activities, drinks and snacks for the children - bonus!), the cafe and also the huge playground.

It was a great afternoon in the outdoors, and I'd thoroughly recommend getting your bikes onto the Chase and giving it a go, although I would suggest that only reasonably confident and strong riders should go on their own, as it is relatively challenging ground which a complete beginner would probably find too much.

Activities and days out